What is an intake manifold and why do you need to clean it?

An intake manifold or also know as an inlet manifold.  The purpose is to supply the fuel and air mixture to the cylinders of the engine.  Found on both petrol and diesel engines and commonly made of aluminium.   Part of this system includes what is commonly called an EGR or and exhaust gas recirculation system.  The EGR job is an emission control unit that puts a portion of the exhaust gas back into the engine cylinders to minimise emissions to meet government compliance.  Due to the fact you are now mixing a dry powder-like substance with a wet substance, you get a finish like flour and water, glue.  The issue with this glue-like mixture is the effect on the engine and performance.  The idea of this being a legitimate, viable option is the heat of the engine should self clean the intake manifold enough that no compromisation to the engine is caused.

Theoretically, it is relatable to think of an engine like a human body with arteries, heart and all similar functioning components.  Like the human body, your engine is not always running at 100% perfect conditions and performance.  Not all engines are sitting at a perfect climate control environment and running 100%.  Sitting at traffic lights, human-style difference of driving and just general life the intake starts over time to clog up.  Arteries to your heart build up in a similar fashion and as we know without the appropriate blood flow to our heart our performance dulls and in the worst scenarios our heart can fail or give us a fright we will not soon forget.  The build up in the intake manifold is a very similar story. 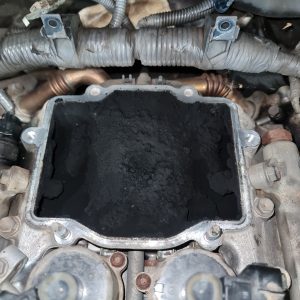 Todays 79 series Landcruiser has 269004km on the clock.  As previously mentioned the client aware of the intake manifold blocking issues had a mobile clean put through the system.  There are a few different methods of this.  Some mechanics will use a spray in an aerosol can that comes out similar to shaving cream.  This will be applied every service to the intake to slowly wear down the build-up and attempt to reduce high levels of build-up.  You mobile cleaners are a little more aggressive and time-consuming using a chemical or detergent-based lubricant and revving through the intake by applying throttle to burn away build up in a similar fashion.  The client as said had the second option performed on his 79 series Landcruiser 40th km ago. 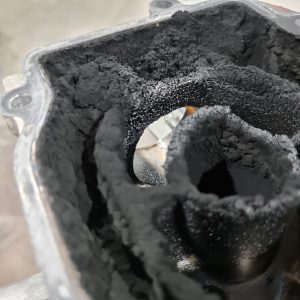 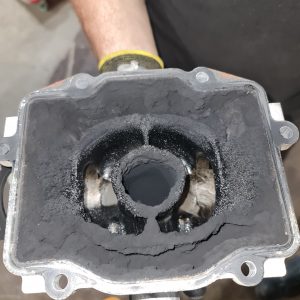 What you can see in these images is the lower or inside from the EGR Valve.  On some sides of this, the build-up is nearly reaching the top of the unit.  This would have to be one of the worst I have seen of these makes and models.  Looking at the vehicle and the load on this car the engine would, by assumption only, be working harder than one without.  Meaning only that the concept of heat burning away the debris would be occurring.

Apart from a lack of performance of the engine and possible engine failure if this debris causes it to work too hard.  Another factor with this amount of build-up is just like clag glue stuck to a surface, a small smear will stay in place and cause very little concern or damage.  When you get to this point where the build-up is at this level the potential for a large chunk to dislodge.  The only place this can go from here is back through the engine.  An engine just like your heart is not designed to have large chunks of debris dislodge and go through its system.  In the same respect if the mobile carbon clean had in one large hit dislodged more of this back into the system the likely hood of a large amount dislodging is more probable. 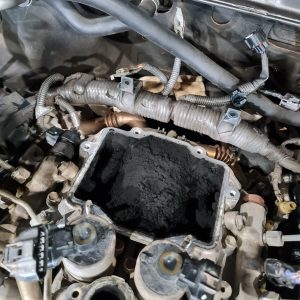 We have seen trialled and tested this method on a variety of engines.  The diesel and Subarus seem to be the main offenders.  When Power Curve Performance resolves the intake carbon build upon an engine they remove these main offending areas from the vehicle.  They are then acid washed overnight taking them back to an as a standard format.  By doing this all off of the vehicle it means there is no potential contamination of the carbon going through the engine and you can be sure the engine is clean.  This method is a lot more labour intensive and costly however not as costly as a new engine from Toyota at around the $20k mark.

How to stop this issue reoccurring

The easiest way is to turn the EGR off in the ECU stopping the EGR from functioning, however tampering with emission controls is illegal.  This leaves us with the next best option being a catch can.  The catch can bi passes the mixture entering the intake system and catches the oil into the catch can.  This is easily installed to most modern or common rail diesel and can be easily be installed by a mechanic fluent with aftermarket accessories and be emptied at your regular service schedule.  There are a lot of catch cans on the market however you do need to make sure you use the right set up for your car, torque is extremely important when adding aftermarket products.   For more information on this follow our blogs.